Everyday Decisions: Choose to Worship … Even When You Don’t Feel Like It 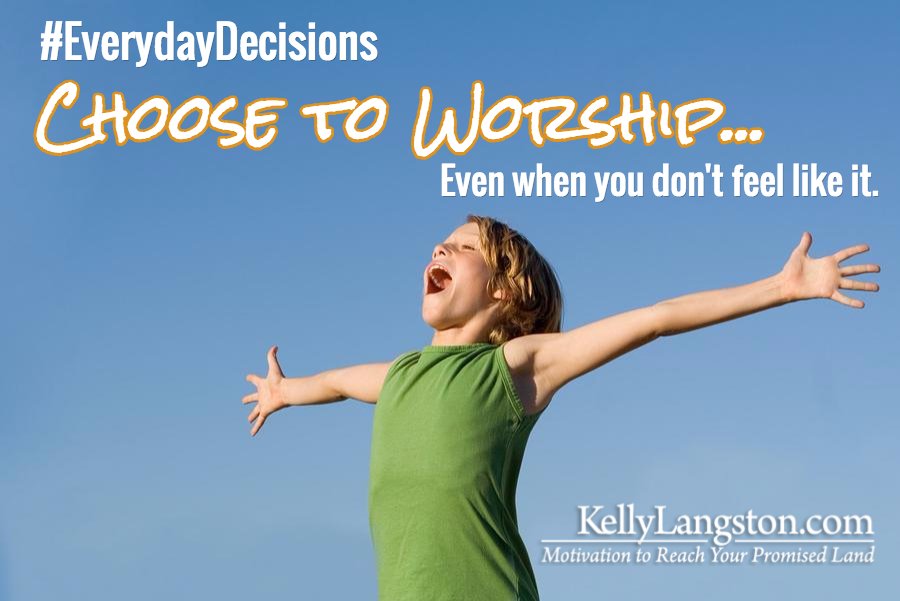 I have a confession: I’ve been struggling during my worship service lately, but something happened recently that helped me see another “Everyday Decision” that shapes our destiny: 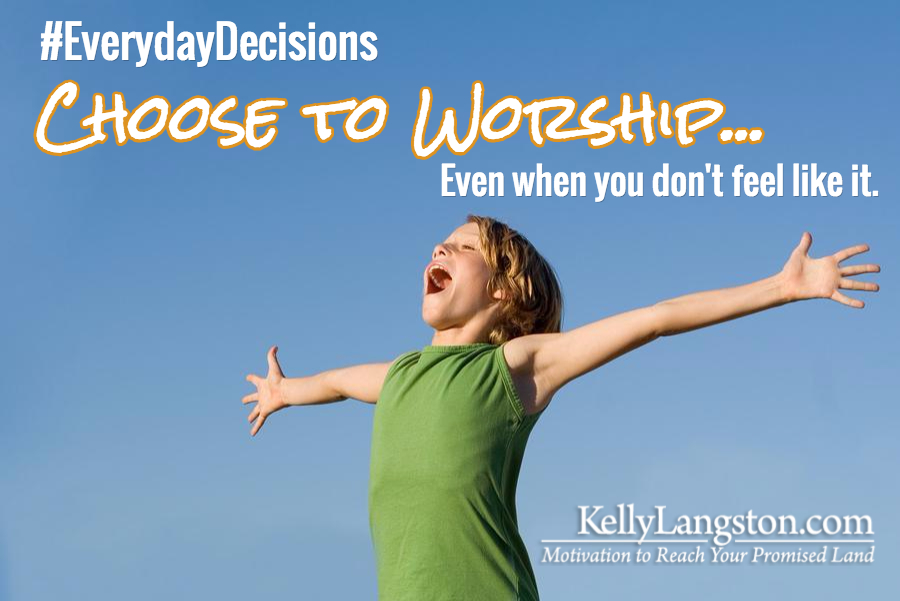 Choose to Worship (Even when I don’t feel like it.)

From a very early age, I have known that I was created to worship the Lord through song.

I knew as a child in elementary school, singing with the children’s choir during church services. In 7th grade, I sang my first church solo. I can clearly remember standing there, singing with all of my heart, my knees shaking and with a mouthful of braces, desperately struggling to keep my lips from sticking to the unfamiliar metal. As I recall, the cutest boy in middle school was sitting in the front row, arms crossed, looking bored… but I didn’t care. I just wanted to sing praises.

I sang in secular choirs at Ohio State University, but it wasn’t until I started singing on a worship team in the mid 1990’s that I felt like I understood it as a calling: singing for the Lord.

Nothing makes me feel more alive than lifting up the Lord in praise, watching the Spirit move in the congregation, and leading people into the Presence of the Most High, where anyone and everyone will find grace, forgiveness, redemption and unconditional love.

The Lord gave and the Lord has taken away;
blessed (praised and magnified in worship) be the name of the Lord!

Yes, I know that I can worship anywhere, and most of the time, I do. I sing to God in the car driving Alec, my son with autism, to middle school. I lift my voice washing dishes, and I praise Him at various times during the day.

Yet during worship services, I’ve been struggling. There, my voice has been weak and faint. I couldn’t shake the sense of loss of a role that I loved so much. I felt unacceptable, and I felt rejected.

That is, until last weekend when the Lord showed me something beautiful

Last weekend, Matt and I stood with the congregation while the worship team led us in the final songs. My 13-year-old son Alec, who has autism, slipped quietly into our row to join us as he always does when his youth lessons have ended. Standing next to me, Alec grabbed my hand and began to sing along to the praise songs. But it was so much more than that. Alec worshipped.

Alec belted out each word, so often off-key, and as he did, he pantomimed each word that he sang. He lifted his hands to the sky as he sang to the Lord, and when he sang about love, He looked to me and touched my heart, acting out the words of the song.

I felt my cheeks flush as I noticed eyes glancing our way. I was aware that Alec’s worship looked strange to most of the people around us. And yet, in that odd dance of praise, and in the notes that Alec sang so boldly, I felt the Father whisper,

“Do you see Alec? That’s real worship. It’s about worshipping me fully, freely, in Spirit and in Truth. That kind of worship is always acceptable to me—I’ll never reject it—because that’s the kind of worship I seek.”

What Acceptable Worship Looks Like
Hint: It’s not about leading it or hitting every note.

In 2 Samuel 6, when the Ark finally entered the city of Jerusalem, King David made it a celebration of worship, and he didn’t just invite the dignitaries. David – the favored, handpicked and anointed king of Israel– invited everyone, the “whole magnitude” of Israel, to share in one of the biggest events in the history of faith: ushering God’s Holy Presence into the city.

And here is the best part: David didn’t sit up from above and watch as the people celebrated. This mighty king jumped into the celebration with the people, literally spinning in dance. (2 Samuel 6) and he took off his kingly robes, too. You see in David’s eyes, there would be no other king to be honored that day. There was only One. The One Whose presence dwelt between the cherubim of the Ark. David was a man who knew how to worship God in freedom, spirit and truth.

My son, like Kind David, worshipped the Lord with every ounce of his being. Some might say that Alec’s worship was … undignified. Yet in my son’s pure and unabashed worship, God granted me a precious glimpse into the kind of worship that ushers in the very presence of God, and it was truly beautiful.

Alec reminded me that true worship is not about leading or being a leader. It’s about being. Being grateful. Being aware of His presence. Being in awe of the Father. And being filled with Christ’s love.

Beautiful worship is so much more than a perfectly performed song—it’s something you do with your life.

The truth? Every single day can be an act of worship.

Lord, help me to worship like Alec, free from the burden of what other people think of me, fully leaning into your beautiful presence, filled with gratitude for your Great Love for me. Lord, on this day, I choose to worship!