Everyday Decisions That Shape Your Destiny: Choosing Prayer Over Fear 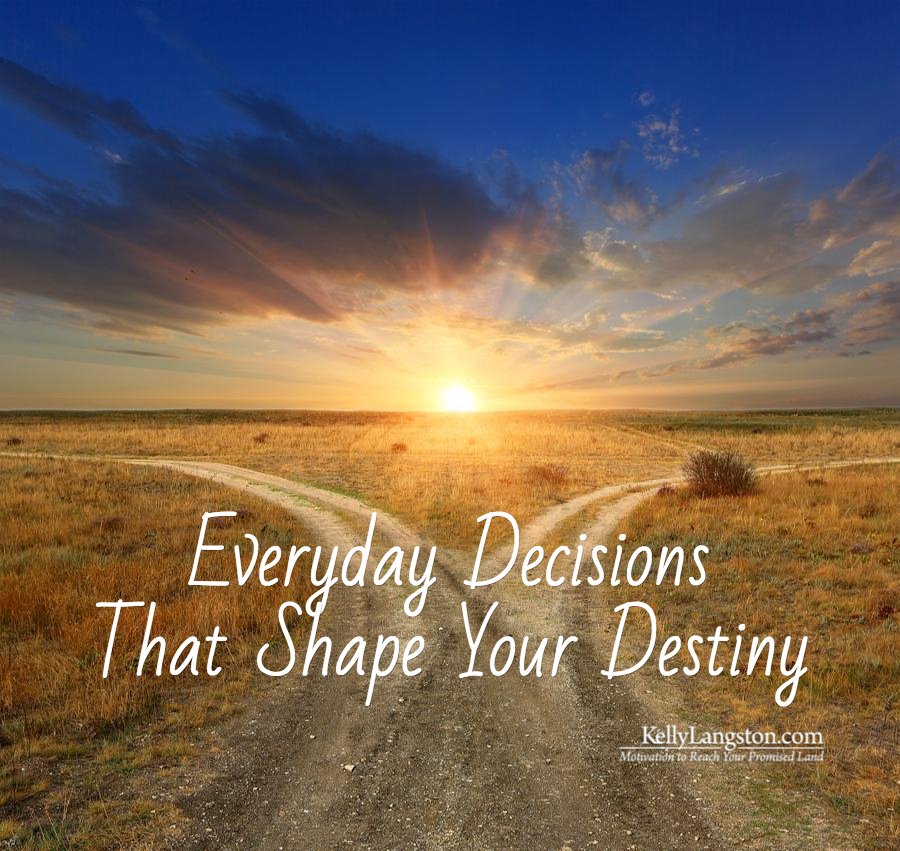 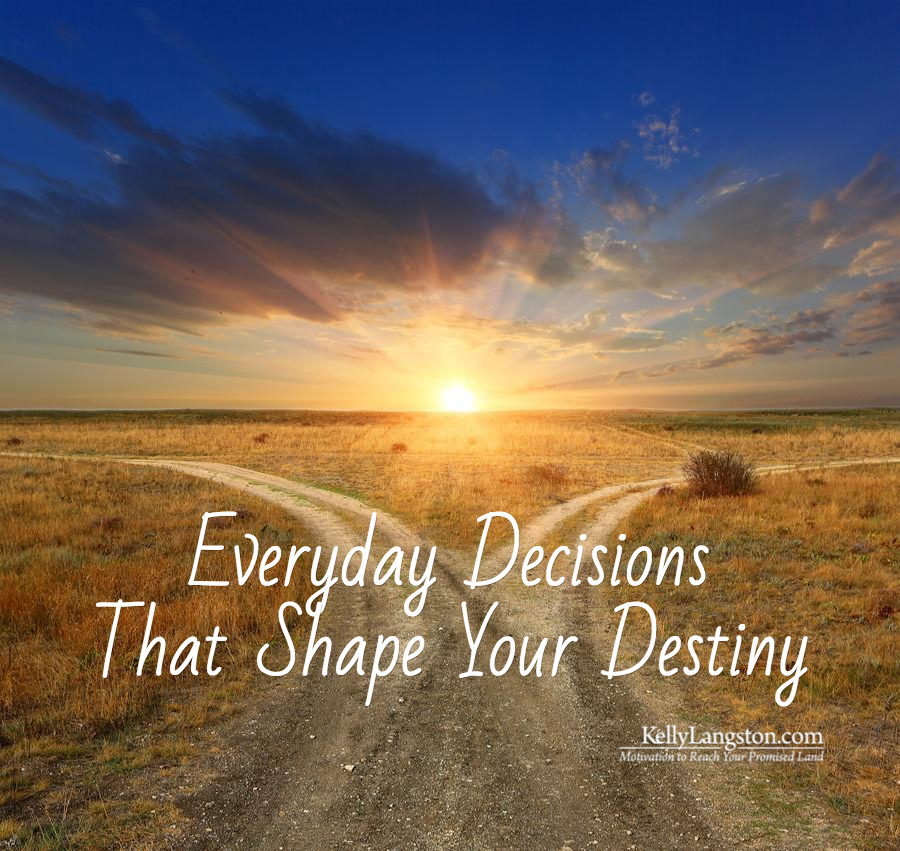 Every day, every hour, we are presented with choices.

There are choices we make each day that do not initially appear to be significant−but make no mistake−these are choices that significantly change the direction of our lives. Too many times, we encounter these choices and don’t consider how they will impact our future. This is the second installment of my blog series taking a closer look at decisions we make with the power to change our lives.  The series is based on the scripture:

I call heaven and earth to witness this day against you that I have set before you life and death, the blessings and the curses; therefore choose life, that you and your descendants may live.

In this second post of the series, I’d like to talk to you about a decision that we face everyday, but often fail to recognize it as a decision at all. We skip right over it because too often we forget that we have another choice–a better choice–with the power to impact not only our own life, but the lives of people around the world. I’m talking about making a choice to pray.

Before you surf away thinking that post isn’t important or that it has been said before, please hear my heart: I believe a choice to pray is one of the most important decisions that you will make today, and I want to tell you why.

As I write this post, the Islamic State, in their on-going effort to terrorize people around the world, has abducted 250 Assyrian Christians. A few weeks earlier, 21 Egyptian Christians were brutally beheaded by the group with a warning message to the “Nation of the Cross.” In this and other graphic demonstrations of brutality, it is clear that their greatest weapon is not munitions.

The greatest weapon in the ISIS arsenal is fear.

Every time we read yet another disturbing headline (and I don’t have to tell you that this happens multiple times a day), we have a decision to make. When we encounter a report that is overwhelming upsetting, we typically choose the option that appears to be our only option: We flip the channel or turn off the radio and move on with our day.

After all, we think, sitting in the safety of our car or sofa, what can we do? We are powerless to make much of a difference anyway … or are we ??

Scripture tells us that we have another choice: It’s the same choice that King Hezekiah made when faced with army of 185,000 Assyrians.

Instead of feeling powerless, we can choose to pray.

Listen to my heart on this:

If we truly believe that we have a God who can move mountains, raise the dead, defeat giants, and defeat massive armies… not to mention create the heavens and the earth and everything in it ….

And if we have been granted full access to this all-powerful, all-knowing God by the blood and sacrifice of Christ Jesus, then a choice to pray carries more power than we can comprehend. We are not meant to be powerless, despite Satan’s attempts to suggest otherwise. In fact, what Satan doesn’t want you to know is this:

Quiet prayers lifted from simple homes can impact the world
in ways we cannot begin to imagine.

I have to be honest here, and this has been on my heart for a few weeks: I’ve been watching and waiting for the Christian leaders to speak up and call Christians to put aside denominational differences and enter into a time of collective prayer.  At a time when ISIS has declared war on the “Nation of the Cross,” shouldn’t we follow the example of scripture whenever God’s people were under attack by calling for prayer?  I’m still waiting.

Meanwhile, terrorists continue to launch flaming arrows of brutality and set them to air, hoping to achieve their goals by spreading fear from nation to nation. We don’t have to comply. Instead, we can choose to pray. The enemy wants to instill fear, but when we choose prayer, we have a promise that God will replace fear with a supernatural peace.

The antidote for the deadly poison of fear is prayer.

Don’t fret or worry. Instead of worrying, pray. Let petitions and praises shape your worries into prayers, letting God know your concerns. Before you know it, a sense of God’s wholeness, everything coming together for good, will come and settle you down. It’s wonderful what happens when Christ displaces worry at the center of your life.

This is a tough one, right?  I get it, because I come from a family of worriers. Have you ever heard these words come out of your mouth, “I’ve been worried sick about you! How could you make me worry like that?”

Oddly, we can often wear worry like a badge.
A rusty, worn-out, ugly badge.

The truth is that God never intended for us to live our lives in worry.  He calls us instead to prayer and reminds us of the real power found in the peace that it brings. It’s like this: the more we pray, the more we draw near to God, and the more we draw near to Him, the more He reveals to us about His love and faithfulness. When we (finally!) understand the depths of that love, worry dissipates like a dark fog in the morning sunshine.

What Choosing to Pray Says About You:

When we choose to pray, we are not given an impotent peace, but a peace that holds God’s mighty power.  The choice in itself tells a lot about what you believe. A choice to pray says that:

If we believe that we have a God who does love us, as scripture says, then it would only follow that our actions and our choices be in line with those beliefs.

Prayer Boldly Opens the Door to Follow Our Dreams

This blog is centered around motivating people to press on to the marvelous life that God has prepared for us. When God places a dream on your heart, He doesn’t expect you to simply grab it and go. Instead, He is inviting you to an adventurous life, walking hand-in-hand with Him in the adventure. He is going to push you to do things that are beyond your ability which will glorify His name.

That journey always begins in prayer. The entirety of the journey is hidden in His hand, like a map rolled out little by little. When we go to God in prayer each day, He reveals the next steps to take. It’s like a beautiful dance with the Father, as we move in prayer from step to step and ultimately to the place that God has prepared for us.

Choose the Simplicity of Conversational Prayers

Prayer doesn’t have to be hard! Think of it as a conversation with someone you love over coffee. Often we try to make prayer harder than it has to be.

When you pray, just be real. Just be YOU.

There’s so much more to come! Please join the conversation on the blog!

Join me for the next few weeks as we look at Everyday Decisions that Shape Our Destiny. Also, would you mind sharing this post with anyone who would be interested coming along for the blog study?

If you have any comments, I’d love to hear them, too. Just leave a comment there. Thanks so much,