Feel like Giving Up on Your Calling? Don’t! Why You Need to Press On! 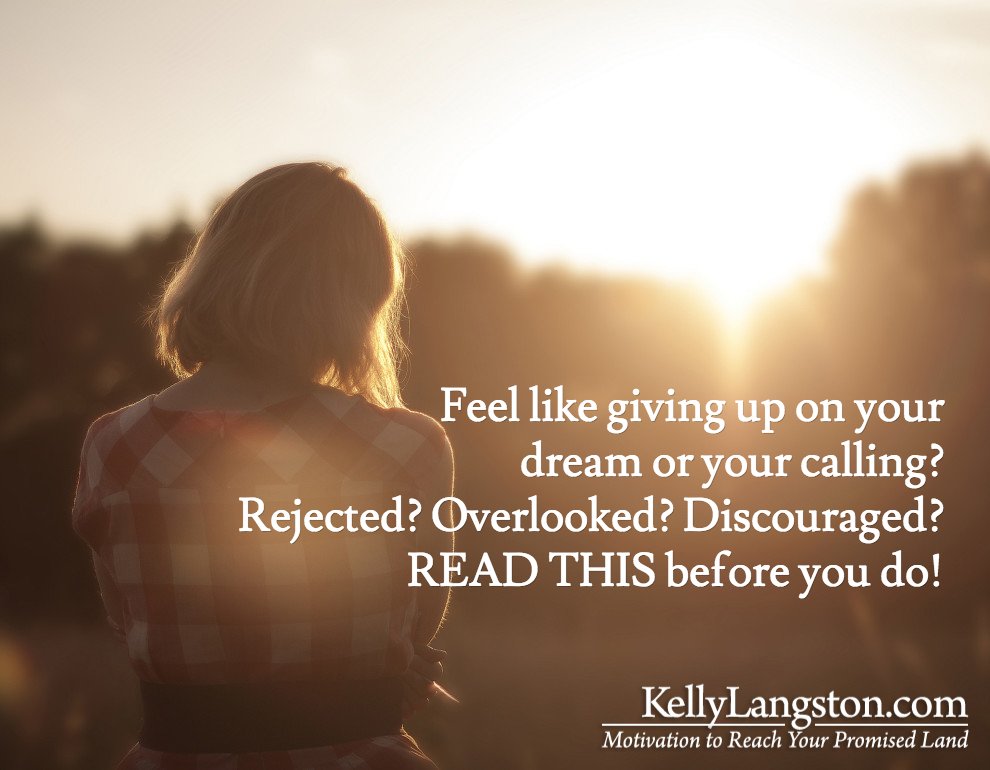 Each individual Christian must help to care for the flock.  Each of us has a gift or gifts from the Lord, and we should use what He has given up to help protect and perfect the flock.

Shell-shocked. That’s how I’ve been feeling after a recent rejection, and I’ve been drowning in doubt ever since.  It wasn’t the kind of rejection that comes from a stranger or a casual acquaintance—I can handle that—but this was worse. This was rejection from someone I held in esteem: words of rejection from a believer.

So for months now I’ve been thinking of those words and questioning myself:

“Am I still called to serve You?”
“Am I too old to make a difference?”
“Have I lost the anointing that I have been given?”
“Is it time to sit down, give up and simply rest?”

Maybe you’ve been there, too.

The worst kind of hurt comes from rejection by someone we think will accept us as we are, flaws and all.  From a friend. A family member, or maybe someone from your church family. We want to be accepted in the way Christ accepts us: as chosen, beloved and although flawed, welcomed. 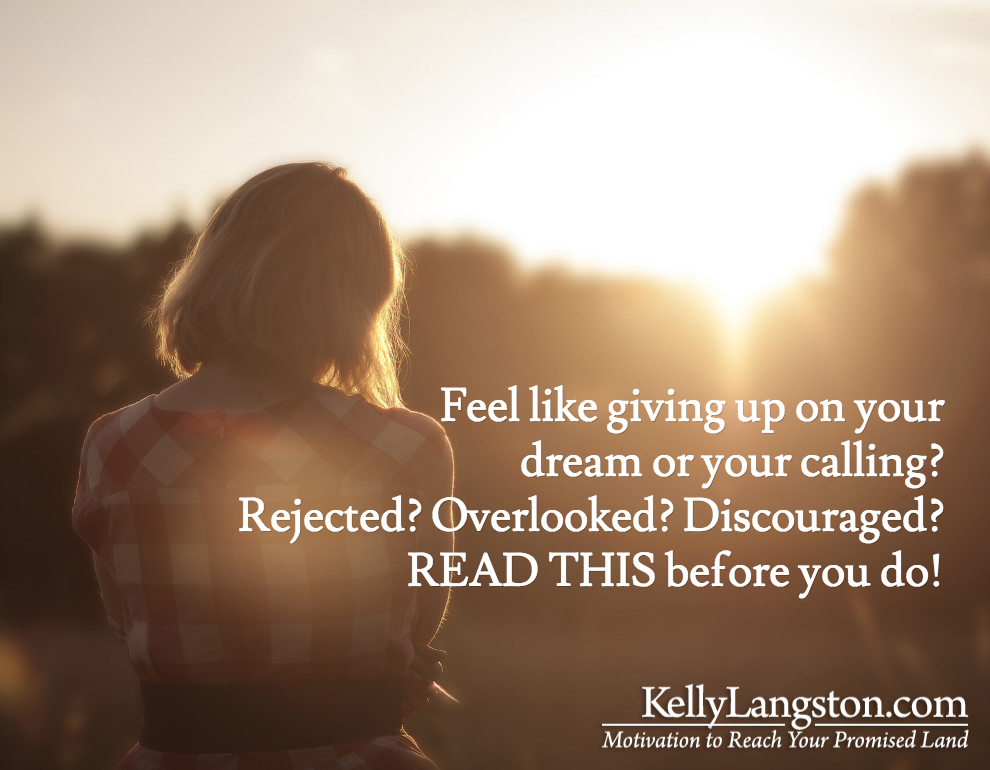 When I was a child I jumped on a seesaw (some call it a teeter-totter) with a friend in a park. We laughed as we took turns rising to the sky and then falling gently to touch asphalt under our toes.  Again and again we rose and fell…until my friend decided to suddenly jump from the seesaw while I was still suspended high in the air.  The seat crashed to the asphalt (remember when playgrounds were built on asphalt?) and knocked the wind right out of me.

If you’ve ever had this happen to you, you know the sensation that it brings. The sudden blow caused the air to burst from my lungs and leave them empty. Worse, my diaphragm was temporarily paralyzed.  I tried to breathe but could not. Without air, I searched frantically for my friend and saw her running off for something far more interesting in the distance.

I soon recovered, but for that one moment I was in a state of panic, eyes wide, longing for oxygen and for my friend. At last, my diaphragm relaxed and with a loud gasp I was able to take in air. I was fine again, physically… but not emotionally. Emotionally, I still couldn’t breathe.

I’ll never forget that day. The memory of it reminds me of the last few months as I’ve struggled with self-doubt. I’ve had the wind knocked out of me, leaving me paralyzed to move forward. No matter what words of encouragement I’ve been given, I could only hear the hurtful words, “You’re not good enough.”

Like a broken pitcher, the doubt spilled into other areas of my life. I’ve been ready to give up on using any of my gifts for God’s glory. After all, it’s far easier to simply quit, to sit down in a comfortable, safe spot and enjoy the parade as it marches by.

For months I’ve been thinking about doing just that.

But this morning, my father reminded me of Peter.  The story is found in John 21.

Peter, once boastful and full of passion, has had the wind knocked out of him. He faithfully followed Jesus for years, passionately serving his Teacher. Peter envisioned a grand ministry with worldly glory and prestige. Instead, when Jesus was crucified, those dreams appeared all but lost. Peter denied Jesus not once, but three times.  Once he walked a mere step behind Jesus, but now he was alone without him. Imagine the questions that must have filled Peter’s mind. He questioned his own calling, full of remorse and self-doubt. He was ready to give up.

So Peter went back to what he was doing before Jesus called him: fishing. This is where we find Peter in John 21, fishing with Thomas and a few other disciples.  Peter fished all night, but he caught nothing.

For every dark night, there is a promise of the dawn.

As the morning light hit the shoreline, the men see a figure watching them. The figure calls to them, “Men, you don’t have any fish, do you? ”

When they answer that they do not, he tells them to cast their nets on the right side of the boat. Peter agrees and gives it one more try. When he does, the men catch such a load of fish that they struggle to pull it in.

Peter’s story sounds all well and good, but how does it relate to us? What does it say about our own God-given talents? Is there a time when it’s okay to throw in the towel and give up? Especially in the face of rejection, hurt and discouragement? When we fish for results, but our nets return empty?

Have you been thinking about giving up?

When they had finished eating, Jesus said to Simon Peter,
“Simon son of John, do you love me more than these?”

Again Jesus said, “Simon son of John, do you love me?”

He answered, “Yes, Lord, you know that I love you.”

The third time he said to him, “Simon son of John, do you love me?”

Peter was hurt because Jesus asked him the third time, “Do you love me?”
He said, “Lord, you know all things; you know that I love you.”

Do you see?  If we truly love Jesus, we are called to press on.

As long as there are sheep to feed—as long as people walk this earth in need of Jesus—we must keep going! We are still called to use every talent that God has blessed us with to share His love with others. We are not called to perfection, but only to feed His sheep. In doing so, we are expressing our love for Jesus.

When we use a gift to bring glory to God, we won’t know the full impact that it has had in another’s life. Only God knows the mysteries of what goes on inside the human heart.  He does, however, promise that His word will not return void:

“For as the rain and snow come down from the heavens, and return not there again, but water the earth and make it bring forth and sprout, that it may give seed to the sower and bread to the eater,

“So shall My word be that goes forth out of My mouth: it shall not return to Me void [without producing any effect, useless], but it shall accomplish that which I please and purpose, and it shall prosper in the thing for which I sent it.

“For you shall go out [from the spiritual exile caused by sin and evil into the homeland] with joy and be led forth [by your Leader, the Lord Himself, and His word] with peace; the mountains and the hills shall break forth before you into singing, and all the trees of the field shall clap their hands.

So if  you, like me, have been thinking about taking a seat and watching the parade pass you by, don’t!  I love how The Message translates the above verses, and I’ll leave you with God’s promise to meet you as you press on:

“So you’ll go out in joy, you’ll be led into a whole and complete life.

The mountains and hills will lead the parade, bursting with song.
All the trees of the forest will join the procession, exuberant with applause.

No more thistles, but giant sequoias, no more thornbushes, but stately pines—Monuments to me, to God, living and lasting evidence of God.”

Press on, dear friend, press on! I’m cheering as you do.