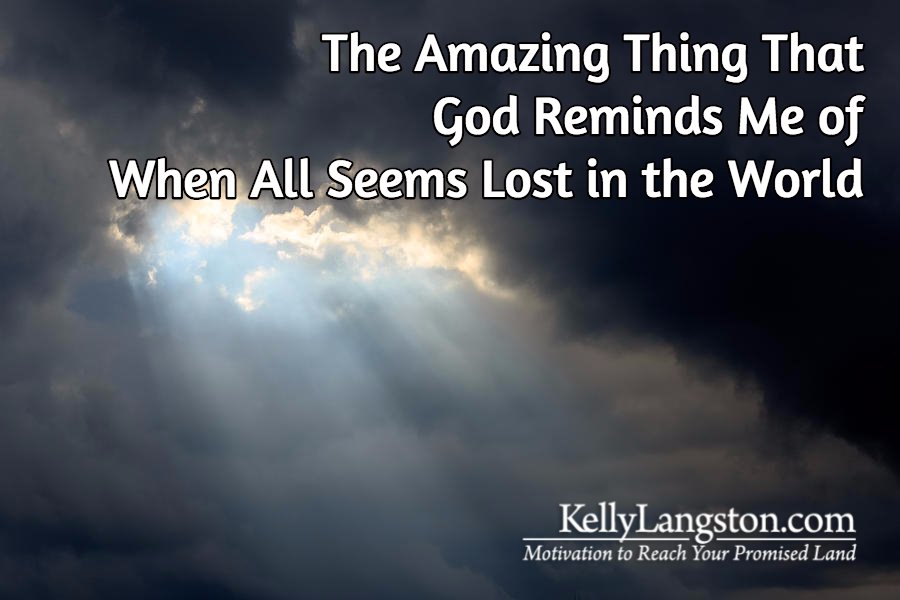 I have been undone by what I see in the news these days!

I am floored by the reports of the mounting chaos and massive sorrow in the world. You only have to watch the evening news once to know what I mean.

This afternoon, I drove around the city running errands, lost in thought about so many world issues beyond my control. As I drove, I asked God question after question:

“How did we get here in the chaotic mess that is the world today? The refugees, the brutality, the ugly segmentation of our nation?”

“Why can’t we defeat the evil that is ISIS? Why are they one step ahead of our every move? It’s like we are playing into their hands!”

“Why is there so much sorrow in the world?”

On and on my questions rumbled like thunder in my head, until I asked one question that got to the heart of it all:

That’s when I realized what I was doing, and the truth of that realization hit me like a brick falling from heaven:

I was questioning God.

After all, Who am I to understand Him, anyway? His omniscient ways? The intricate details of His plan?

As that understanding dawned, I heard these quiet words:

(I later looked up the context of that scripture which actually says this: “Be still, and know that I am God; I will be exalted among the nations, I will be exalted in the earth.” A perfect response and proof that the Holy Spirit reminds us of Scripture whenever we need it.)

See, only God can provide one simple answer to the many questions that a split second ago seemed unanswerable!! The story—His story— is beyond my understanding. And the simple truth is this:

During the bleakest days of the Revolutionary War in 1776, George Washington encouraged his troops with the words of Thomas Paine in an essay titled  “The American Crisis”:

“These are the times that try men’s souls…
Tyranny, like hell, is not easily conquered.
But the harder the conflict, the more glorious the triumph.”

When All Seems Lost… Expect God to Act

Increasingly, we see a world situation that is beyond our control. Am I exaggerating here? I don’t think so!

No politician has the correct answers to fix the world. Like fighting quicksand, with every action we take to rise above, we sink further in the muck. Just as we do not see that wind that ushers in dark storm clouds, we do not see the details of God’s greater plan.

But make no mistake: God is in control.  Yesterday. Today. And Tomorrow.

In any good story, we find a segment called the “Rising Action.” It’s when a serious conflict develops that must be resolved one way or the other. As the audience, it’s the time when we guess which direction the story will ultimately go.

After the “Rising Action” of a story, we come to “The Climax.” This is the part of the story when all seems lost and we are filled with suspense (and sometimes, even terror).

In a movie, this is the part of the film
when we are pressed low into our movie seats,
wide-eyed and on edge, waiting to see how the story will end.

We breathlessly await the resolution of the story. Who else but God to write the ultimate story. No doubt, we are watching it unfold before our very eyes. Even more incredible is that we get to be on the stage.

We Are Watching God’s Story Unfold Before Our Eyes

I’m not sure how far along we are in His story, but whenever I watch the news, it does seem that we are coming to a place where all seems lost. Perhaps that is exactly where the “Author and Finisher” is leading us after all. (See Hebrews 12:2)

The Bible takes us to a great climax, and ultimately ends with an everlasting “Resolution.” (Read Revelation 21) It’s a thrilling ride to be sure! Isn’t it amazing that we get to be a part of it?  Thanks to God’s gift of scripture as told through the Revelation of John, we know how the story ends.

When All Seems Lost, Be Still and Know That I Am God

One day, we will sit around heavenly campfires and recall the difficult roads we journeyed. The giants that we battled, and the darkness that threatened to take us out.  We’ll compare our scars and share our testimonies.

And when we do, we will smile and sing and rejoice that our Deliverer made every battle worthwhile, and ultimately, He led us into victory at war’s end.

And what about today?  On this day, we can sing loudly. We can love more deeply. We can enjoy the sunrises and marvel the sunsets. We can simply be.

I may not have the answers to the world’s problems, but I this is something I can do.  I hope you will, too.

I’ll leave you with this scripture:

Oh, the depth of the riches both of the wisdom and knowledge of God!
How unsearchable are His judgments and unfathomable His ways!
For Who has known the mind of the Lord, or Who became His Counselor?
Or Who has first given to Him that it might be paid back to Him again?
For from Him and through Him and to Him are all things.
To Him be the glory forever. Amen.

The following is one of my favorite songs by Steven Curtis Chapman. The video shows actual video footage of the first five Evangelical Christian missionaries from the United States sent to bring Christianity to the Ecuador’s Huaorani people. Although these men were attacked and killed by the Huaorani warriors they came to serve, ultimately the deaths of the men strengthened the missionary effort. Years after their deaths, the widow of Jim Elliot and the sister of Nate Saint returned to live among the Huaorani.  In doing so, many embraced Christianity, including some of the warriors responsible for the killings of the missionaries. It was God’s story all along. Read more about the story here.

The night before the anniversary of 9/11 a rainbow emerges from the World Trade Center and stretches across the city pic.twitter.com/MG58hnCVrD